The goal of this report is to explore factors that underly behaviour change, leveraging the MINDSPACE framework.

Created by leading social scientists with support from the Cabinet Office, MINDSPACE is an acronym, introducing simple and low-cost mechanisms of behaviour change rooted in behavioural science research1.Although initially created in the context of driving change through public policy, MINDSPACE can be applied to a wide range of contexts. 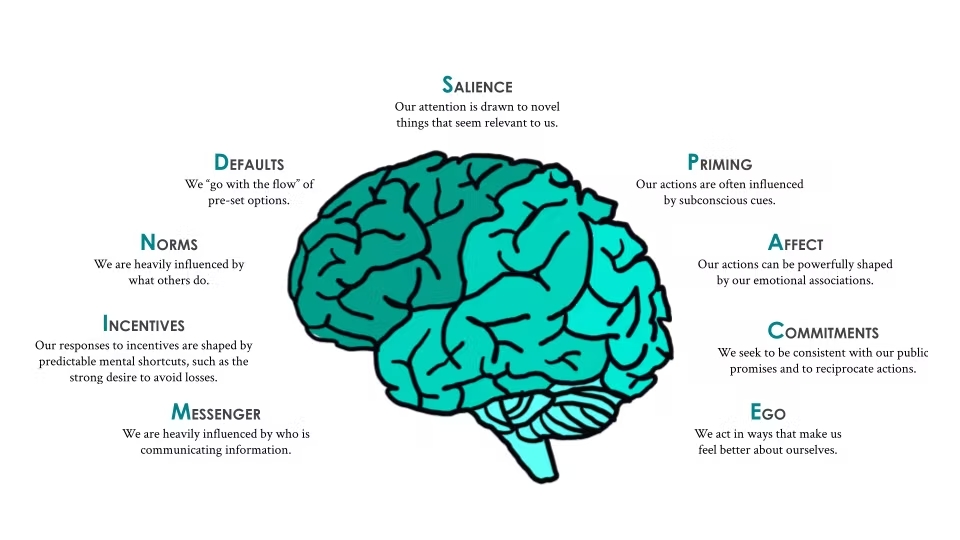 First is the role of the messenger. Individuals ascribe different importance to messages depending on who communicates them. Information communicated by people in positions of authority (e.g., experts), those who are demographically similar, or those who are positively perceived, is likely to be more effective. In corporate settings, organisational leaders can play an influential role. For instance, leader role modelling is found to increase the motivation and obligation amongst employees to call out immoral conduct at work2. Other research finds that witnessing their leaders voluntarily engage in pro-environmental behaviours makes employees more likely to behave in a similar, environment friendly manner3.

Second, incentives increase or decrease the motivation to engage in a certain behaviour. They can be financial (e.g., a bonus or tax deduction) or non-financial (e.g., boost self-esteem or recognition). Motivation plays an important role here– extrinsic motivation involves engaging in a behaviour because it leads to a desirable separate outcome (e.g., money), while intrinsic motivation involves individuals engaging in an action because it is inherently enjoyable or interesting to them4. However, incentives often result only in temporary compliance – once they are withdrawn, people might cease to engage in the desirable activity. Research on the utilisation of financial incentives to change health behaviours has frequently found positive behaviour change in the short run, although, the health behaviours are often not sustained after the incentives are ceased5. An experiment to increase exercise behaviours with employees at a Fortune 500 company yielded similar results6 – incentives led to doubling of gym attendance. However, the month after the incentives stopped, employees sustained only 25% of in incentive-led increase in exercise, with most of this rise vanishing within two months. Another study found that incentives increased eco-driving-although non-monetary incentives (e.g., vouchers for cinema or restaurants) were more effective than monetary incentives i.e., cash, resulting in a 5% average reduction of fuel consumption 7.

Third, norms suggest that our behaviours are strongly influenced by how others around us behave. One way to drive behaviour change is through making people aware of desirable social norms/behaviours. However, references to negative social norms should be avoided as they might encourage undesirable behaviours. For instance, when households were provided information on how their energy consumption compared to others, above-average consumers reduced their usage, but below average users ended up increasing their consumption8. Additionally, norms have been found to increase likelihood of taking flu vaccinations9, increase in recycling behaviour by almost 23%10, as well as increasing towel reuse at hotels by up to 25%11. Thus, norms can result in conformity.

Next are defaults, referring to pre-selected options that take effect if an individual doesn’t make an active choice. For instance, to increase participation in their payroll giving programme where employees donated some of their salary to charity, a retailer automatically enrolled all employees into the scheme (i.e., making this the default), thus increasing participation by around 40%12. However, when utilising defaults in such instances, it is important (and ethical) to provide people the autonomy to ‘’opt-out’’ of the scheme if they prefer. Defaults have also been successfully leveraged to improve gender equality outcomes at work. For instance, when new job vacancies had as a default, an option for selected candidates to work part-time or in a job share13, there was an overall increase in number of applicants, as well as a 13% increase in the number of female applicants.

The fifth mechanism is salience. Our attention gravitates to things that are novel, relevant to us, easily accessible, and simple. In an experiment to encourage plant-based diets, the menu at a restaurant was rearranged with all the vegetarian dishes being listed first. This resulted in reduced meat consumption by 38% as it became less convenient to order these dishes, whilst increasing orders of vegetarian dishes by 200%14. Other research finds that making future cost savings salient has a positive effect on the uptake of energy efficient TVs15 and appliances16 as well as on the likelihood of choosing EVs17. Moreover, salience has also been utilised to improve compliance through clearly highlighting the repercussions of behaviours such as the enforcement action for nonpayment of taxes18. Thus, simplification is important since people are more likely to focus on information that is both, easily understood and available./p>

Next is priming. People’s behaviours can also be shaped by sub-conscious cues that can range from certain words and objects to even smells. Priming has been used in a range of contexts. For instance, exposure to words associated with a healthy lifestyle (e.g., active or fit), resulted in employees more likely to engage in healthier behaviours such as taking the stairs19. Similarly, goal priming amongst employees through incorporating achievement-oriented words in an email from their CEO led to a 15% increase in performance effectiveness20

Affect refers to our emotional associations to different stimuli that have the power influence our behaviours. When it comes to modifying behaviours to combat climate change, eliciting intensely negative emotions should be done cautiously as it can be counter-productive – it might result in anxiety and fear which can result in denial or avoidant behaviour21. Generating feelings of hope is found to be valuable as it enhances the sense of efficacy and capacity to combat the problem, thus increasing the likelihood that the individuals will act to address climate change22.

Commitments are another mechanism; people tend to stick to behaviours that they have committed to. We are particularly committed to promises made publicly as well as to reciprocal behaviours. Commitments become more effective as the costs of failure rises. These costs again can be financial or non-financial (e.g., loss of face). Commitments have been found to increase weight-loss in adults with obesity23, led to hotel guests behaving in an eco-friendly manner (25% increase in towel reuse)24, as well as resulted in people engaging in voluntary recycling behaviours25.

Finally, ego also plays an influential role. As human beings we typically act in ways that make us feel good about ourselves. Research suggests that green and sustainable behaviours are positively linked to life satisfaction since these behaviours boost people’s self-image26. In addition, the more an individual is concerned about their self-image in environmental behaviours, the more likely they are to engage in green purchasing behaviours27.

Thus, behavioural science research and the MINDSPACE framework have a wide range of applications. However, an important caveat here is that context matters. Initiatives or interventions that may have worked in a particular context (e.g., country or organisation) might not always replicate in another setting. Therefore, rigorous background research, research design, as well as monitoring and evaluation are crucial to any successful behaviour change intervention.