Cost of living and commuter trends

As Britons feel the pressure of inflation, with rising costs impacting every part of our lives, employees are making difficult choices in a bid to save cash. Much like the scale of commuting behaviour change associated with COVID-19, decisions made now have the power to shape commuting habits long into the future.

Commuter Census 2022© explored the commuting habits of nearly 11,000 people. The cost of living was a prevalent topic, garnering more than 900 free text responses. These sentiments conveyed both worry and frustration in regard to the affordability of public and private transport.

61% of commuters declared they were ‘very concerned’ about rising fuel costs. These worries appear to be creating an appetite for change, with 81% open to considering an alternative to their current mode. How these concerns manifest to unsettle the status-quo is yet to be seen, but this Commuter Census data suggests rising prices are already challenging default commuting behaviours, creating fertile ground for embedding sustainable mobility within our society.

Forward-looking employers should embrace this period of flux to implement sustainable commuting initiatives. Let’s explore the opportunities and barriers to decarbonisation in response to the cost-of-living crisis. 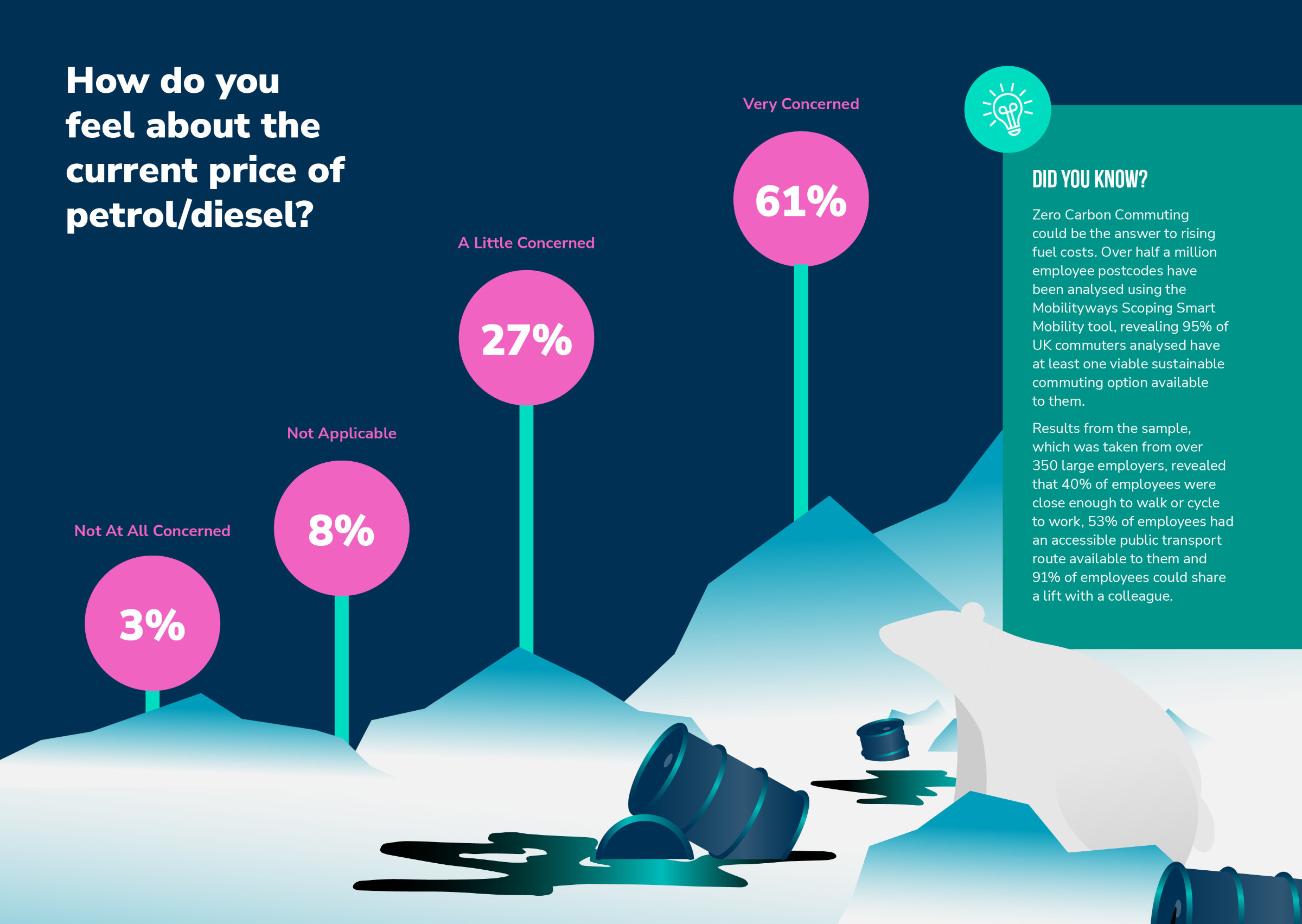 A return to the office

According to ONS, home working in the UK more than doubled from 4.7 million to 9.9 million people between October to December 2019 and January to March 2022. There’s no denying that hybrid and remote working has afforded employees unprecedented levels of workplace flexibility. However, some believe rising energy bills herald the demise of the working from home era.

The energy price cap is poised to increase to £3,549 this year, and some employees will undoubtedly consider returning to the office in a bid to reduce energy and heating bills. For many employees, simply being out of the house means you no longer have to heat it.

The Commuter Census found that cost and convenience remain the main drivers of commuter behaviours, and the deciding factor for many will be whether it’s cheaper to commute to the office or work remotely and heat their homes. This is dependent on a number of factors including the mode and distance of the commute, the age and size of the house, and if anyone else is home during the day. Employers looking to compare commute vs remote working emissions will have to capture all this data. 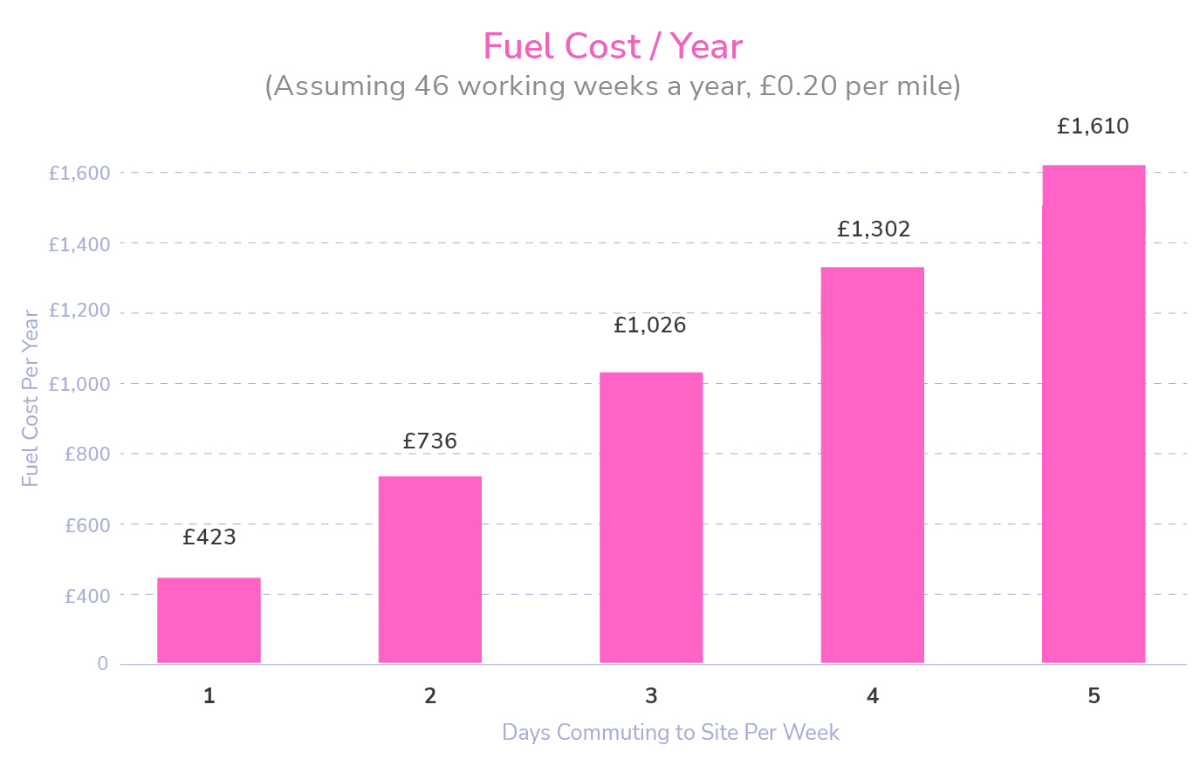 The four-day working week has also been suggested as a means to ease the mounting financial burden on employees. Future of work think tank, Autonomy, examined how a four-day working week with no loss of pay could reduce childcare and commuting costs. It found that an employee with a child under two years old would save £1,440 in childcare and £340 in commuting costs on average in a year.

Having been met with both support and scepticism in the press, it’s unlikely there will be a mass move to the four-day working week in the near future – especially as so many organisation’s are still firming up their post-pandemic hybrid work policies.

Worryingly, analysis has shown that hybrid working can offer the worst of both worlds, with emissions generated from heating single occupancy homes as well as offices greater than CO2e generated from the commute alone. It’s important to bear these environmental considerations in mind when developing net zero policies and practices. Survey data also suggests the importance of taking how employees feel about the commute into account before making permanent policy changes.

When asked how many days they would like to commute in the future, only 7% of respondents wanted to commute five days a week, despite a quarter of them already doing so. The commute – or lack of it – is one reason why nearly a quarter of those asked wanted to work fully remotely, all the time.

For those favouring a hybrid approach, the regularity of the commute also had a bearing on costs and commuter sentiment. The Commuter Census shows that five-days-a-week commuters have a journey that is on average a third shorter than those commuting just one day a week. Yet even with that shorter distance the average five-day car commute equates to £1,610 a year in fuel alone.

This cost, when considered in conjunction with insurance, road tax and maintenance costs, becomes increasingly untenable for many commuters. Forbes recently reported that one in five motorists are giving up their cars.

A move away from single occupancy vehicle commutes

Research from car servicing and repair company, Kwik Fit, revealed that over a third of drivers have cut down on ‘non-essential’ car journeys. This will be music to the ears of the Department for Transport who declared ‘walking and cycling should be the natural first choice for short journeys’ in 2021’s Decarbonisation Plan.

Sarah Mitchell, Cycling UK’s chief executive, believes that where possible, a move to active travel is the answer to rising fuel costs.

People should be considering cycling as a cost-effective way to commute shorter journeys. The upfront investment, even with eBikes, soon pays for itself when you consider how much you are saving at the petrol pump.

Of course, walking and cycling isn’t always a viable option. Using the average commute distance of 19.5 miles for a single occupancy car journey, the average current UK fuel price of £1.75 per litre, and the average car consumption of 40 miles-per-gallon, this equates to a round trip cost of £7.80 per day.

Where public transport may have previously offered a convenient and affordable alternative to private car ownership, survey respondents highlighted how this is no longer the case. Andrew from Glasgow noted,

I drive to work because it’s almost impossible to get there quicker and cheaper than this. Trains are far more expensive and would double my commute time. The bus doesn’t come anywhere near my house.

A report from the Campaign For Better Transport charity in early 2022 found that public transport in UK cities was the most expensive in Europe. It has also been reported that UK bus users face “significant” price rises in 2023, with operators expected to lock in fuel purchases at higher rates for the next year, further burdening the millions of commuters who rely on public transport.

Public transport patronage is still between 20 – 30% less than it was pre pandemic, and rising costs, strikes and reduced services threaten public transport usage further. This is in spite of government funding for the railway sector increasing by £10.4 billion in 2020–21 and an additional £2 billion of funding support provided to the bus industry in England.

One potential solution highlighted in the Commuter Census was car sharing, with 85% of respondents open to the idea. Sharing a journey is twice as efficient and half as expensive as driving alone, and with little infringement on commuting convenience, this could prove an attractive solution in the battle against rising fuel costs. Employees at large campus style organisations could benefit from this, with high volumes of people making the same repeated journeys as seen at Heathrow Airport, which boasts the UK’s largest single site car share community. 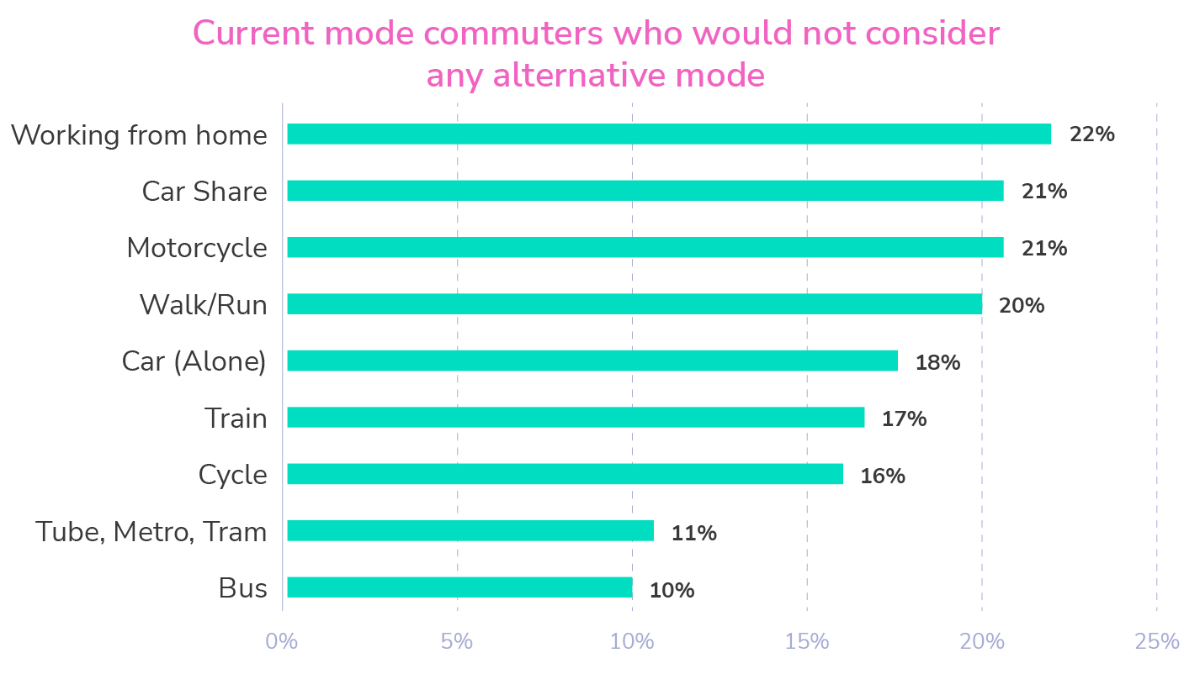 “It’s employees living closest to the airport that gives us the ideal opportunity for getting them to consider modal shift from car to more sustainable travel. Given the density of colleagues’ home locations in these areas, car sharing should be a very attractive option even with the variation in shift patterns. There should always be somebody on a similar shift going in your direction.” Says Matthew Wool, the Route Development Lead for Heathrow Airport.

The latent potential of car sharing was also found in the analysis of over half a million employee postcodes using Mobilityways Scoping Smart Mobility tool. Results from the sample, which was taken from over 350 large employers, revealed that 40% of employees were close enough to walk or cycle to work, 53% of employees had an accessible public transport route available to them and 91% of employees could share a lift with a colleague.

Not only is the mode and distance of the commute shaped by where you live, but also how you feel about it in relation to the cost-of-living crisis. As previously noted, the vast majority (61%) of commuters proclaimed to be ‘very concerned’ about rising fuel costs, with record highs of petrol and diesel prices pushing an average of £2 per litre.

27% of our Commuter Census respondents felt less strongly but declared themselves to be “a little concerned”, with only 3% stating that they were not concerned at all. However, the national data only tells part of the story, with a large variance in feelings between the South-East of England and the rest of the UK.

84% of Northern Irish commuters identified as being “very concerned” about rising fuel costs compared to just 45% of Londoners. These findings mirror the regional ACELs (Average Commuter Emission Level), with Northern Ireland coming out with the largest ACEL score in the UK, generating 1281 kg of CO2e per year per commute compared to 72kg in the South-East.

A likely combination of factors has caused this discrepancy in the severity of commuter feeling, including car-reliance in Northern Ireland’s rural communities and better connectivity and public transport provisions in South-East England. London also has the lowest rate of vehicle ownership in the UK, and higher wages, which may provide a buffer for additional costs. Without extra funding to support sustainable mobility infrastructure in rural areas, these spatial inequalities will persist.

We really need to target people at critical moments in their lives when things change, like when they move house, move jobs or they have a child

If times of personal change are indeed the best opportunities to influence sustainable travel behaviours, then the collective upheaval of the cost-of-living crisis could be a ripe opportunity to tackle the 18 billion kg of CO2e commuting emissions generated every year.

Sustainable commuting is repeatedly shown to offer a wide range of health, wellbeing and cost saving benefits which can help employees feeling the pinch. Values-led organisations looking to support their workforce through this difficult time should look at the commute, and how it could be optimised to be cheaper for their teams, and more sustainable for the planet.